By Mathew Maavak, Doctoral Candidate in risk foresight at

As US federal debt approaches $21 trillion in a matter of months, an eye-popping equivalent amount seems to have gone cumulatively missing from government coffers over the past two decades.

The missing $21 trillion was tabulated by a team of researchers led by Dr. Mark Skidmore, Morris Chair of State and Local Government and Policy at Michigan State University.  Skidmore’s team tallied up “undocumentable adjustments” – a euphemism for accounting prestidigitations – at the US Department of Defense (DOD) and Department of Housing and Urban Development (HUD) between 1998 and 2015. The study was verified by no less authority than Catherine Austin Fitts whose mainstream credentials included a stint in the George H.W. Bush presidential administration.

The most shocking instance of such book-keeping legerdemain, amounting to a colossal $2.3 trillion, was admitted by then Secretary of Defence Donald Rumsfeld on the noteworthy date of Sept 10, 2001. Rumsfeld was very specific in identifying America’s adversary: It was “closer to home”; it was the “Pentagon bureaucracy.”

The Sept 11 terror attacks the very next day however consigned these trillions into a black hole of oblivion. Yet, the black hole kept accruing ominous mass over the years; readying itself for an event horizon that may suck in nations, stock markets, livelihoods and lives into a fatal vortex.

Several imponderables remain: Who controls this hidden stash? Has the US Government Accountability Office (GAO) sought closure over this issue?  Is the internecine civil war within the US deep state in reality a tussle over this slush fund? Whatever the hypothesis, make no mistake: An “undocumentable” $21 trillion in limbo somewhere can fund revolutions, regime changes and wars anywhere.  It can not only fix spot prices for global markets but “spot narratives” in the global mainstream media as well.

It can ensure any “days of rage” planned over US President Donald J. Trump’s recognition of Jerusalem as the capital of Israel would remain a damp squib until the time emerges to redraw the contours of the Middle East. Once tempers are skilfully stoked towards a Middle East endgame, global markets can be shorted to localize geopolitical attention. The “days of rage” may then be directed at local leaders who will be in desperate need of solutions to keep their regimes and societies intact.

For an added perspective, consider this: Ever wondered how George Soros, with an official net worth of $8 billion, can threaten governments in a way Li Ka-Shing with a net worth of $33.7 billion cannot? In all likelihood, funds channelled into Soros’ transnational “human rights” hydras were never quite his in the first place.  An activist billionaire is the perfect shill for deep state and transnational interests.

Such snowballing suspicions must have weighed heavily on the Pentagon. It has finally decided to conduct its first audit in history by raising an army of 2,400 auditors from independent public accounting firms to see where the missing trillions as well as an inexplicable 44,000 US troops had disappeared to. It is rather conveniently late in the day for such an “audit” as the global economic deck seems to be stacked and ready to implode.

The trillion-dollar drainage from US government agencies has occurred synchronously with the relentless wealth fractionation process worldwide, along with a rise in global socioeconomic volatility. As the chart below shows, a mere 80 individuals had the same amount of wealth as 3.5 billion people in 2014. 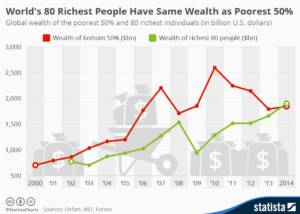 This trend is expected to worsen through 2020 and beyond. According to a 2016 McKinsey report, around 540 million young people in 25 advanced nations, including the United States, face the prospect of becoming poorer than their parents.

This brings up an Aristotelian dilemma. The Greek sage had equated a stable society with a strong middle class. Around 2,300 years later, financial whizkids immersed in Reaganomics claim otherwise. The accrual of wealth among the few, according to the new wisdom, is supposed to generate more investments and jobs.  The reality is just the opposite: According to the US-based National Bureau of Economic Research (NBER), about 10 percent of global GDP has been ploughed into offshore tax havens instead of national treasuries and factories. More ominously, this figure jumps to 15 percent for Europe and up to 60 percent for Gulf Arab and Latin American regions. The haemorrhage of trillions is not just limited to the United States. There are many more trillions available to the transnational oligarchy to reshape the global order.

Furthermore, accelerating technological breakthroughs are already creating a permanent global underclass.  Robots alone will displace 800 million workers by 2030.  This poses a quandary for highly-populated emerging powers like India where, the richest one per cent own more than 53 per cent of the national wealth.  What will India’s unskilled, teeming millions do when factories adopt robots and related Industry 4.0 production paradigms? The “Make in India” initiative must be matched with “Train in India” and “Hire in India” programs. Time is of critical essence here to avoid mass population redundancy.

Echoes from the 30s

However, what happens when workers worldwide face mass redundancy? Rising global wealth inequality is now seen as a transnational threat, with a 2007 study by the UK Ministry of Defence presciently warning of a coordinated global middle class uprising in the coming years. This anticipated backlash has been attributed to a pervasive decline in mainstream news quality and a countervailing rise in cyber-activism. While debt levels continue to set new records in the West, its media is blissfully peddling red herrings on an unprecedented scale. Google’s decision to de-rank articles from RT and Sputnik is just the latest manifestation of the West’s desperation to control the information matrix.

When the bubbles do burst, as they did during the Great Depression, the global oligarchy would face the collective ire of the masses. There is however a time-tested economic model for this sort of predicament. It is called Fascism.  In a post-bubble landscape, the poor and dispossessed will no longer provide a market for mass-market products while factories that produce them will sooner or later go bust. The only ironclad economic engines left revving – as historical patterns reveal – will be the ones focused on policing and militarization.

Henry Kissinger had long sensed this imminent déjà vu, and is currently advocating a pre-emptive solution in the form of a “New World Order” based on regionalized power centres. “The contemporary quest for world order,” Kissinger wrote in a 2014 Wall Street Journal essay, “will require a coherent strategy to establish a concept of order within the various regions and to relate these regional orders to one another.”

In a 2012 peer-reviewed paper titled ‘Class Warfare, Anarchy and the Future Society’, the author had reached a similar conclusion – from the opposite end of the Kissingerian worldview. The world would be convulsed by a series of manufactured crises to facilitate an international order governed by regional power centres.  The Kissinger solution appears like a plutocratic twist of the Gramscian Political Society; one where repressive state organs would be “counselled” by oligarchs propped by trillions from a transnational treasury. When societies get desperate and breadlines get longer, nationalist leaders would baulk at blocking the charities of the mega-rich. The folks in Kiev are still grateful for Victoria Nuland’s cookies even while their nation regresses into a Third World asylum. Imagine what a $21 trillion cookie jar can accomplish worldwide?

Some regions like South Asia, however, lack the basic infrastructure to impose and integrate inter-regional orders of the kind advocated by Kissinger.  This is perhaps a reason why India is being courted with much alacrity by the West.  Australia, one of the quadrilateral security partners proposed for India is however staring at a $5.6 trillion housing bubble worth four times its GDP. A nation of 24 million people cannot carry such a burden, unless it can induce a massive destabilizing capital flight from Third World nations.

When that happens, NGOs and social justice warriors worldwide can expect an unexpected bonanza in the opposite direction – in the form of cash and cookies to champion a new order in their hopelessly-impoverished societies!