The demonstrations of December 2017 against the Mullahs of Iran were very different from those that took place in 2009 – spearheaded by the Iranian Green Movement.

In 2009 protests were aimed at the hard liners represented by Mahmoud Ahmadinejad and his Iranian Revolutionary Guard Corps (IRGC) supporters – it was not a call for revolution, but for political reform and a public protest against the disputed presidential victory of Ahmadinejad.

The 2017 outbreak of demonstrations across Iran are markedly different from 2009. The call has not been for reform, but for the removal of the regime.

However, far from the organised and defined goals of the 2009 demonstrations, contemporary protestors took to the streets with some removing hijabs in religious defiance, many tweeting #pashimanam (“we regret” [i.e. voting for Rouhani]), whilst others chanted “Death to Khamenei” in the streets. 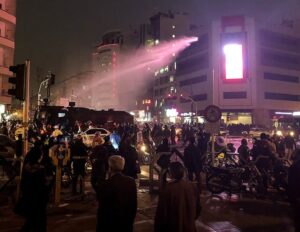 The international attention has also been distinct. Whereas Obama did not overtly favour the efforts of Iranian protestors in 2009,[1]Trump, has been all too eager to throw the weight of his twitter account behind contemporary Iranian protestors. Trump has made no secret of the fact that he is no fan of the Iran nuclear deal and is eager to delegitimise the Iranian Mullahs in any way he can. Unsurprisingly this has led to a narrative of foreign interference emerging, harking back to the CIA’s 1953 overthrow of the government of Mohammed Mosaddegh. With these new protests and the renewed interest of foreign parties in Iranian domestic affairs, will the current demonstrations in Iran lead to a popular revolution and the possible re-establishment of the Pahlavi dynasty?

As is the case with many states, Iran’s history illustrates that violence and revolution share a close relationship. 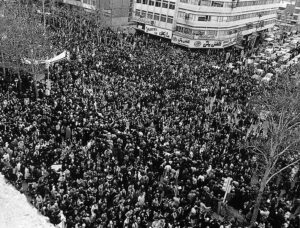 At the start of protests in December 2017, some reports place the death toll at 50. Across 142 cities 8,000 have been arrested. Eleven people have reportedly died from injuries sustained under state custody, though all of these figures are hard to verify. Aside from the establishment’s response to what started as peaceful protests, Iranians hold severe grievances against the theocratic government.

The unemployment rate for 15-29-year olds has soared to 24%. The Iranian currency, the Rial, has hit a record low; a comprehensive crackdown on money changers followed reports of Iranians emptying bank accounts to convert savings into more stable dollars and euros. The country’s banking structure has been imperilled by institutional failures and corruption. Up to 40% of loans carried by Iranian banks are believed to be delinquent.

Whilst religious foundations enjoy undisclosed budgets and the IRGC receive yearly budgetary increases, the populace experience economic hardships. The easing of the international sanctions imposed on Iran had initially helped bring growth to the economy, and the prospect of resuming the export of oil overseas promised an economic bonanza.

However, it has not been a bonanza for the many, but the few. Proposals to raise fuel prices, cut government assistance subsidies, and the obstruction of investment in Iran’s ailing infrastructure – all whilst the IRGC maintains economic impunity and clerics are granted increasingly vast sums of money – gives ordinary Iranians, i.e. all but the Shiite elite, reason to seek out change. 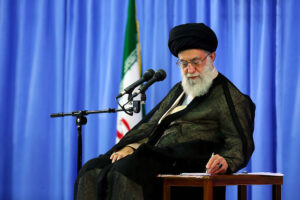 Grievances are not purely economic. President Hassan Rouhani’s inability, or unwillingness, to enact reform has severely disappointed many of the 24 million Iranians who voted for him. Unsurprisingly Rouhani has little impetus to enact true reform, lest he would risk imperilling the foundations of the Islamic Republic. His proclivity for following the lead of the unelected 78-year-old Grand Ayatollah Ali Khamenei has only compounded this issue, increasing the severity of disconnect between the ruling Shiite elite and ordinary Iranians.

What then makes the 2017 protests distinct from those of 2009? Early observers were quick to identify how the turnout for the 2009 protests was greater than those recently. Although interestingly, numerical turnout is only a facet of what makes the protests distinct.

Of the reported 3,700 who have been arrested, 90% of those detained are under the age of 25, i.e. they are too young to have participated in the 2009 Green Movement. 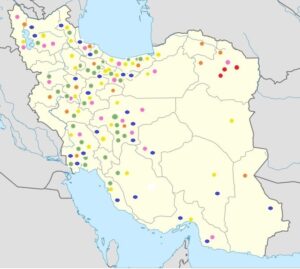 The 2017-2018 protests did not erupt from Tehran but from provincial towns, towns so far removed from Tehran that many Iranians claim to have never heard of them! Where 2009 was largely the middle class in Tehran instigating protests against electoral fraud, the 2017-2018 protests have spread from the working class to the conservative right against Rouhani to encompass all manner of grievances.

It is not just the protestors which have changed, but the tools available to them.

In 2009 there were 55 million mobile phone subscriptions in Iran, 2% of which were estimated to be smartphones. Currently there are 80 million mobile phone subscriptions with 41% of households estimated to have a smartphone. If the Green Movement was awarded the soubriquet of “Twitter Revolution”, the increased connectivity of the protesters and the leap in access to social media has presumably given protesters efficiency and organisation far beyond the protests of 2009. Even ‘secure’ social media platform Telegram has been outlawed in Iran by the political leadership for fear of its potential impact as a communication tool among disaffected anti-government Iranian activists.

Why then have protests missed their revolutionary moment? Despite reports of pockets of protest across Iran still filling social media, protests have passed their zenith. The ambiguous nature of the anger expressed by the protestors can help to explain this. It has been unrefined anger against the Mullahs and their government. Where coordinated and well-timed outbreaks of unrest with predetermined objectives may have given the protests a chance of survival, their spontaneous nature has proved to be a fatal weakness.

Without knowing that ultraconservative protests in the hinterlands were to mutate and manifest across Iran, how realistic was the prospect of an unwitting middle class forming an effective force for change? New causes such as the removing of the hijab, regime change and ending Iran’s extraterritorial activities were thrust into the spotlight, promising to the test the establishment. Yet, in the absence of any real leadership, intelligentsia or revolutionary vanguard, the protests have expended their fuel with too little direction to offer a practical challenge to their political structures.

Unlike 1979, there seems to be no post-government plan. If protesters had succeeded in the removal of Khamenei and his theocratic autocracy, what would follow? Could the absence of a successor herald the return of the Pahlavi dynasty?

Reza Pahlavi, heir of the Shah ousted in 1979, has been vocal in his support for the demonstrations. Chants calling for the reinstatement of the Pahlavis have been heard in several protests. There is an abundance of speculation amongst commentators (mainly foreign) on the possibility of a return, however, many perceive the words of the crowd to be more fanciful than real. The long-exiled Pahlavi, currently living in the US, may dream of returning home and some voices in the crowd may genuinely want it, but there is a lack of tangible support for such an occurrence. Invoking a Pahlavi re-ascendance has, however, issued a challenge to the Mullahs.

A more practical challenge has come from foreign sources.

Iran’s rivals have been proactive in their support of protestors leading to Rouhani denouncing foreign involvement on numerous occasions. These accusations are not baseless. There is an established history of foreign involvement in Iranian domestic affairs; the aforementioned meddling of Anglo-American intelligence in the 1953 coup against Mosaddegh, the suspected Israeli-American Stuxnet cyber-attack targeting Iranian nuclear centrifuges of 2005, and Israeli involvement in the assassination of four Iranian nuclear scientists between 2010-2012, give Iran legitimate reasons to eye Israel and the West suspiciously.

Iran is not alone in calling out foreign meddlers; Russia too has cast an accusatory glare to Iran’s rivals, warning against foreign destabilisation efforts and blaming foreign agents for the deaths of several demonstrators; Indonesian parliamentary officials have displayed staunch support for the Iranian government, offering full support against foreign interference; and, the Venezuelan foreign ministry has been vocal in its opposition to perceived imperialist and interventionist US elements.

Iran’s rivals have reason to be invested in Iran’s domestic unrest. Iran currently commits resources and finances on a massive scale to the ‘Axis of Resistance’ across the region; to militant organisations such as Hezbollah and Hamas, to help prop up Assad’s besieged regime through the Syrian civil war, to Iraq’s Popular Mobilization Units, and to the Houthis in the current proxy war in Yemen.

Despite a long past with international sanctions, Iran has forged and maintained an impressive strategic footprint in the region. Iran’s strategic dedication and execution should not be underestimated. However, the protests have shown that the mullah’s zeal for regional influence will outpace the resources and support available – a war-weary population struggling to prosper whilst Khamenei and the IRGC siphon money and resources out of Iran will unlikely forget their grievances.

How committed are the Mullahs and the IRGC to maintaining Iran’s strategic footprint; will Iran strive to placate the domestic sphere at the expense of the regional sphere? It is unlikely. Withdrawing support for the ‘Axis of Resistance’ would all but dissolve the influence Iran has worked so hard to cultivate; cutting support to Hezbollah could risk weakening the group’s hold on Lebanon, failing to properly back the Houthis could give Saudi Arabia a more favourable position in Yemen, and failing to bolster Assad’s government forces could reinvigorate many of the anti-regime groups within Syria.

If support for these groups falter, Iran runs the risk of creating a power vacuum. Granted, this is a worst case scenario projection for Iran yet it illustrates why Iran’s external support for these groups is so crucial. If Iran turns inwards to resolve its internal woes and a power vacuum develops in its wake, the balance of power would change dramatically. If America and Israel were to link up through Iran’s weakened jurisdictions and form a new power bloc, the consequences for the region and Iran’s strategic footprint would be tremendous.

On the other hand, if Iran continues its current trajectory the worst-case scenario is no more favourable. If the balance between foreign and domestic is not addressed, the return of protests is highly likely. The question is: how many waves of protests can the Mullahs sustain before directionless anger is refined into organised revolt? If there is a possibility of regime change there will no doubt be an influx of foreign interest, with Iran becoming a chaotic chessboard for competing interests in the region.

There may have been no revolutionary climax to Iran’s new protests, but they are a signifier of the Islamic Republic’s existential predicament. Somehow, Iran must find a balance. The anger of ordinary Iranians may have abated, but it is still there. If the Mullahs do not take heed to the challenge issued to them and balance is not found, the most recent wave of unrest may well join the protests preceding the Persian Constitutional Revolution, the 15 Khordad Uprising and the casualties of 1979 in the chronicles of Iran’s history.

[1]The Obama administration was focussed on attempting to put a halt to Iran’s nuclear program and it could only do so with the co-operation of Iranian authorities.

[2]Adescendant of the Prophet Mohammed through his grandsons, Hassan ibn Ali and Hussein ibn Ali.