Everything he said, I concur with, including his main assertion that the

attacks on KSA, Emirati and now Japanese and Norwegian tankers in the Gulf are messages to Donald Trump.

The assailants are still unknown, in spite of US claims that they found the ‘smoking gun’ linking these attacks to Iran.

But in the fluid world we live in, and perhaps have always lived in, ‘truth’ is difficult to separate from fiction.

When information from ‘unimpeachable’ sources of the US government come forward with evidence to support and clarify what they want seen as the truth, it is indeed impossible for the media and the general public to know if what they are seeing is worth believing.

Simulacra is everywhere. It is in our entertainment, it is in the way we as individuals present ourselves to the world, and it is certainly part of the information matrix of every government on planet Earth. The sad fact is that there is no ‘objective truth’ in our world. There are deliberate agendas masquerading as truth. There are clear social and personal biases that we wish to pass off as truth. There are even people who to this day believe that the Earth is flat and the Moon landings were faked. To these people, that is their truth in spite of whatever evidence exists to the contrary. Today’s world is very much a hall of distorted mirrors into which we have been wittingly or unwittingly trapped. 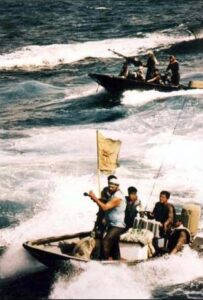 When we look at the Gulf, there are many competing truths. Each with its own sophisticated, competing narrative. Where you stand on any one of these narratives depends on where you sit on the ideological, sociological, political and faith spectrums. But one thing is clear. Today’s Gulf community is riven with factionalism and bias. And this bias is driving much of what we are seeing in the region today. Arguably the most compelling narrative is the Sunni-Shia divide.

This divide casts the theocratic regime of the Islamic Republic of Iran as a clear villain of the peace – determined to bring about the fall of both the United States and Israel and to spread Shiism throughout the Ummah (the world’s Islamic community).

In this narrative those who resist the Shia encroachment driven by Iran’s Ayatollahs are cast as the forces of light – even though neither of these forces are natural nor easy allies – the Gulf States led by the Kingdom of Saudi Arabia (KSA), Israel and the United States. And even though these ‘forces of light’ can, have and continue to use suspect, illegal, or unethical methods to achieve their ends, this narrative of conflict has become our truth when looking at the mess that is the Gulf today.

Imad is correct that it is not in the interest for the Iranians to spark a war that would likely conclude with the end of the Ayatollahs, the IRCG and their attendant acolytes. That would be madness. And yet, they cannot but not act in their national interest if they are indeed meant to survive the covert and not-so-covert means by which they are being confronted by the ‘forces of light’.

A broader war for regime change in Iran would not benefit the United States. The economic damage from such a war would cripple the US economy for decades and traumatise another generation of young Americans expected to fight for the Stars and Stripes in an area where nothing makes sense to the Western observer. It would also corrode existing alliance relationships which under the Trump era, have already weakened to the point where the US cannot ‘command’ its once unassailable American-led global network as it once did.

Israel, the Western enclave of the Middle East, hyper vigilant, hyper organised and hyper technological cannot survive in a region so antithetical to its existence should it participate in a war against Iran. This would simply make more tenuous the Jewish state’s position in the Middle East as generations of new, more capable and more motivated jihadists target Jewish concerns around the world as well as Israel itself. Complicating Israel’s position in this way cannot be seen as advantageous.

And so, why is it that in spite of all of these sound reasons why a war against Iran should not happen, people in senior government positions are hedging their bets? Arguably because of the following reasons.

The American belief in their own strategic and technological capacities leading them to conclude that war with Iran, a poor, isolated state, would be short and victory assured, that the Ayatollahs are ‘bad people’ and average Iranians will celebrate their downfall: Ignorance.

The Israeli belief that destroying the theocratic regime may usher in a new Iranian government that it could work with to counter-balance against the Arabs and the Turks while at the same time taking out a key strategic competitor and threat: Opportunism.

The Gulf Arab belief that their oil and gas wealth will guarantee their protection from Iranian assault by hiring the US military and legions of American condottieri. And that they are centre stage of a religious battle against the Islamic Republic of Iran – one in which the custodian of Mecca (the KSA) is destined to win: Faith.

Wars can be won on opportunism, but rarely have they been won by the triad of Ignorance, Opportunism and Faith. This triad looks sure to lose everything it sets out to achieve because underpinning it all is arrogance. Arrogance in each player’s fundamental belief that it is right and that a war with Iran presents a ‘solution’ to what ails the region. For instance by getting rid of Iran’s regime this would rid the world of Hezbollah as a destabilising force, stabilise and democratise Syria, stabilise Lebanon, stop civil war in Yemen and make Gaza more ‘controllable’. Each of these problems, however, are much more than ‘Iranian’ in scope. They are deep local fissures, highly complex in their origins and makeup. Taking out the Iranian component might solve one problem but might create many more as local actors jostle for new patrons to furnish them with weapons, support and training to continue their fights – for guaranteed – those fights will continue with or without Iranian patronage.

As I sit here in Japan, far removed from continuing violence, petty squabbles and strategic-level hatreds of the Middle East, I wonder whether the message the US president is getting from whoever is behind the tanker attacks will be processed rationally. Going on the US president’s track record, we’ll all have to wait for his next tirade of Tweets to find out.