Originally published in The New Arab by Dr. Imad K. Harb, 30 April, 2019.
Republished by SAGE International Australia with the kind permission of

Dr. Imad K. Harb is the Director of Research and Analysis at the Arab Center Washington DC. He is also Senior Non Resident Fellow Greater Middle East for SAGE International Australia (SIA) as well as Member of the SIA Advisory Board.

This week, the Trump administration announced the end of waivers for sanctions it re-imposed on Iran last November. Countries enjoying those waivers – China, Japan, South Korea, India, Turkey, and others – are to halt all imports of Iranian oil by 2 May, or deal with American penalties.

On 8 April, the administration designated Iran’s Islamic Revolutionary Guards Corps a foreign terrorist organisation. It was the first such designation by the United States of an official arm of a sovereign state.

It indeed looks like the pressure campaign that President Trump is having his administration wage on the Islamic Republic is progressively ratcheting up. While designating the IRGC a terrorist organisation has its own dynamics, ending the waivers represents a grave threat to Iran’s economy and regional peace.

In fact, the sanctions campaign has wider implications outside Iran, and potentially dire consequences for the Arabian Gulf region and the world at large.

The uncertainty in the oil market

It was inevitable that ending the exemptions would shrink the supply of Iranian oil to traditional customers in Asia; namely, China, Japan, South Korea, and India. That decline quickly translated into an overnight price hike of Brent crude that reached $75.60 per barrel on 25 April, the highest since last October.

One day later, that figure declined to $71.98, and to $71.94 on the morning of 29 April, supposedly following interventions by President Trump. But there is no guarantee that this downward trend will continue given the fluidity of market dynamics and the reality of increasing tensions with Iran.

Importantly, however, and considering the general chaos that characterises the administration’s policies and their implementation, it is doubtful that the Trump White House fully prepared for the day after rescinding the waivers.

While the administration assured consumers and the oil market that Saudi Arabia and the United Arab Emirates are ready to make up for the shortfall in supplies, Saudi energy minister Khalid al-Falih quickly announced that the Kingdom will not increase its output for at least a few weeks.

It does not appear that the Trump administration thought that Saudi Arabia, or any other oil producer for that matter, may want to exploit the situation of a higher oil price to increase its revenue.

On the other hand, countries in the Organization of Petroleum Exporting Countries (OPEC) and others, including Russia, have vowed to limit oil supplies in a bid to raise prices. It is thus likely that whatever assurances the administration got about replacement supplies are unfounded, at least for the time being.

Not even Libya is a good source for needed supplies as its renegade General Khalifa Haftar leads an assault on its UN-supported Government of National Accord in Tripoli.

Ending the waivers will also apply to Iraq which had received a 90-day one last March to import badly-needed gas supplies for electricity production.

Adding insult to injury is the fact that the country may be unable to help address the shortfall caused by Trump’s decision. Iraq’s political dysfunction and the dominant role of Iran’s friends in the body politic will make cooperating with Washington on this issue a fraught proposal.

In other words, and given the circumstances, American and other consumers could be looking at higher prices for the foreseeable future, including the busy summer driving season. Only a change of heart by producers toward exporting more oil can change this outlook. 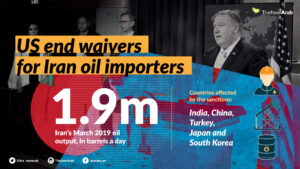 Trump’s announcement was of course welcomed by Saudi Arabia. The Kingdom’s foreign minister, Ibrahim al-Assaf quickly considered the decision a step toward confronting Iran’s “destabilising” behaviour in the region.

Supreme Leader Ayatollah Ali Khamenei vowed that Iran will continue to export its oil as before. Iran’s President Hassan Rouhani berated Arab Gulf leaders who approved of Trump’s declaration and accused them of antagonising the Iranian people.

Iran’s foreign minister Mohammad Javad Zarif tried to lessen the impact of the decision, warned of unspecified consequences, and continued to call for dialogue.

Mincing no words, the commander of the IRGC’s naval force, Alireza Tangsiri, threatened to close the vital Strait of Hormuz if Iran is prevented from using it.

China and Turkey, two of the states affected by ending the waivers, were quick to announce their opposition. Worse, they vowed to keep importing Iranian oil, thus opening themselves up to retaliation from the Trump administration.

But worst of all is the possibility of escalating tension in the Arabian Gulf that is most likely to lead to unwarranted circumstances and even all-out war.

First, if choking off Iran’s oil exports succeeds, there is a distinct possibility that the Islamic Republic will also abandon the Joint Comprehensive Plan of Action which it signed to end debilitating sanctions.

Iran abandoning the JCPOA will be catastrophic for regional stability and will likely prompt Saudi Arabia to start a nuclear weapons programme because of the resulting security dilemma.

Second, what is the United States to do if threats of penalties do not sway importers of Iran’s oil such as China and Turkey, the two states that were clear in their opposition to Trump’s move?

If Washington responds by embargoing Iran’s facilities, especially those in the Gulf, Iran is likely to retaliate by forcibly stopping Arab Gulf states from exporting their oil through Hormuz, or even by closing the strait altogether.

Such a possibility is sure to lead to a military confrontation between Iran on one side and the United States and its regional allies on the other.

If Washington decides to ignore the expected violations of sanctions by China, Turkey, or others, Mr Trump’s bluster will be exposed. US foreign policy will once again reflect the shambles that the president has made it for the last two years.

The same should be expected if Iran succeeds in finding ways to surreptitiously sell its oil despite American efforts to the contrary. It would be unwise to ignore Khamenei’s promise that Iran will find ways to sell its precious commodity.

Disastrous decisions from the outset

Trump’s decision to end the waivers on importing Iranian oil will go down as another example of a haphazard foreign policy that is devoid of deep study and evaluation. But it remains only tangential and a by-product of another, much more fundamental and dangerous decision.

That one was the president’s withdrawal from the JCPOA in May 2018 and revival the following November, of US sanctions on Iran and those who deal with the Islamic Republic.

In fact, Trump had no choice but to end the waivers in his rush to fulfill his campaign promise of 2016 to choke off Iran.

But it would be folly to separate the president’s original decision regarding the JCPOA and all subsequent actions from his obsequious obedience to the wishes and diktats of Israel’s prime minister Benjamin Netanyahu.

To be sure, the two men have become a dynamic duo that may have finally succeeded in making the Arabian Gulf, the Middle East, and the world at large more prone to war and devastation.