This article looks at one of the world's problematic spots regarding water scarcity and how this environmental issue may become a zone of geopolitical tension.

Kira is a third year Master in Design Studies in Risk and Resilience and Master in Landscape Architecture student at the Harvard Graduate School of Design. A 2016-2017 Thomas J. Watson Fellow, her work focuses on designing climate resilience with a focus on coastal environments.

A Green Line runs across the nation of Cyprus, separating the island nation in the northeastern Mediterranean Sea into two constituent territories: the southern Republic of Cyprus and the Turkish Republic of Northern Cyprus (TRNC). The line is named for the green wax pencil that a British Joint Forces General first used to draw the de facto border in 1963. 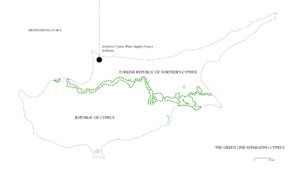 Apologies for the poor resolution of this map of Cyprus. But here you can still see the clear division where the Green Line bisects the island into the Republic of Cyprus to the South and the Turkish Republic of Northern Cyprus to the north

In person the line is brown and dusty. Where there is vegetation, it’s sparse and shrubby. The only shade offered at the border crossing between the Greek Cypriot south and Turkish Cypriot north in Nicosia, the island nation’s capital, comes from the awnings set up by border control on either side.

Day laborers, tourists and separated families cross the line semi-freely at six United Nations manned checkpoints across the island. Passports are checked, not stamped. It is a soft border. Yet the Green Line extends beyond the physical boundaries of the island. The Republic of Cyprus has been a member of the European Union (EU) since 2004. The Turkish Republic of Northern Cyprus, despite being de jure recognized as part of the Republic of Cyprus, is considered outside the control of the Republic, and is therefore diplomatically and economically isolated from the European Union and its allies.

Membership in the European Union drove a majority of northern Turkish Cypriots to vote in favor of reunification in 2004, while Greek Cypriots cast a majority vote against reunification – ensuring that the southern territory of the island would enjoy the benefits conferred from EU membership while the northern area remains reliant on Turkey, the splinter state’s only geopolitical supporter and sole benefactor. Instead of requiring the country to be reunified before admitting either territory into the EU, European leadership allowed the south to join, deepening the economic inequity and limiting employment opportunities for Turkish Cypriots.

Despite these political differences, the physical climate on either side of the Green Line is semi-arid and Mediterranean. It is the warmest European Union member state, and one of the driest – rainfall averages 400 millimeters annually, almost all of which is caught and stored in over 100 dams and reservoirs constructed across the island in both the north and south.[1][2]

This water infrastructure is critical to provide water for households, agriculture, and an evolving tourist industry that has continued to grow since Cyprus joined the EU in 2004. This increasing demand is met with a decreasing supply of rainfall and reservoir holdings.

Since 2007, when the largest reservoir in the Republic of Cyprus ran dry, Greek Cypriot authorities have spoken openly about the water shortages facing the island due to climate change.[3] Over the past decade, the nation’s water shortages have been exacerbated by saltwater intrusion into the island’s aquifers and decreasing rainfall; the Cyprus Institute predicts that rainfall will decrease by an additional 10-15% over the coming decades, while temperatures increase across the island.[4]

“Today, over 85,000 Cypriots face water scarcity, an environmental problem that has ignored the arbitrary geopolitical boundary between the north and south, and stressed the supplies of both territories.[5][6]

The Turkish Republic of northern Cyprus has developed what Turkey hails as a 50 year solution to the TRNC’s water supply problem: the northern Cyprus Water Supply Project, an 80 kilometer high-density polyurethane pipe that stretches over the ocean floor from Anamur in southwestern Turkey to

Geçitköy in northern central Cyprus.[7] Completed in 2015, the pipe brings fresh water from a newly constructed dam into a reservoir in Turkey, with a reported capacity of 450 million tons annually, ten times northern Cyprus’s usage.

Ironically, the project is an example of a successful transboundary project, and it’s the world’s first sub-sea pipeline. Yet, with the water from Turkey only reaching northern Cyprus, the project reinforces the political separation between southern and northern Cyprus, and effectively weaponizes the supply of fresh water. It suggests that the government of northern Cyprus is doing more to secure itself as a separate political entity in the face of water shortages than to support reunification with the Republic of Cyprus. Further, it disregards the reality of the power dynamic between the south and north: the soft border between the Republic of Cyprus and the Turkish Republic of Northern Cyprus, not between the TRNC Turkey, has boosted the TRNC’s economy and lowered the poverty rate, with tourists crossing the Green Line from the international airport in the Republic and laborers commuting to the south of the island for jobs.

Additionally, Turkey faces similar water shortages to Cyprus. Anamur, in southwestern Turkey shares the same hot, dry climate as Cyprus. There is no guarantee that its newly constructed dams will provide water into the next decade, let alone secure a surplus of water that Turkey can afford to let flow across the ocean for a half century.

The European Union offers an alternative approach to Turkey’s infrastructural construction. The EU’s Blueprint to Safeguard Europe’s Waters and Water Framework Directive establish protocol to mitigate water scarcity and droughts, and to provide fresh drinking water to all member states.[8] Technological innovation in desalinization and water management are shared across the 27 member states, with wealthy, wetter nations in Scandinavia offering a safeguard for Cypriots, either to provide water for the nation or open their porous borders to the EU member state.

In order to take advantage of these long-term benefits, the TRNC must open the northern Cyprus Water Supply Project across its own soft border to provide water to the Republic of Cyprus. This act is both political and symbolic. By opening its reservoirs to the south, the north risks losing Turkey’s political support – and water flowing through the pipeline – but it allies the TRNC with a more viable and ultimately secure long-term source of water within the ecological boundaries of the island, and will allow the Republic of Cyprus, as a single body, to build its own water resiliency within its internationally recognized geographical bounds, not a politically fractured territory.

To effectively mitigate the chronic risk of water shortage in Cyprus, the island nation must redefine itself away from the political impasse that has dissolved into a symbolic soft border maintained for geopolitical power, and instead look to environmental thresholds to actively manage its own water supply, including a program of desalinization plants and checks on development.

In this moment, Cyprus has the opportunity to define itself as a pioneer reshaping our dialogue on borders, moving away from arbitrary, unitary decisions like the Green Line shaped by the stroke of a pen, towards geographically and culturally informed environmental thresholds. For northern Cyprus, the path to the European Union does not lie in dissolving a political dispute, but rather in building an equitable water infrastructure across the Green Line – perhaps with enough water to provide shade on both sides for the future.