Prof. Purnendra Jain Professor in Asian Studies at the University of Adelaide,

Since Tokyo relaxed its five-decade-old restrictions on arms exports in 2014, the Japanese government and defence industry have expressed considerable interest in selling their products in the international market. The latest attempt is by Japan’s Kawasaki Heavy Industries, which aimed to sell its P-1 submarine patrol aircraft to a French–German project that is developing a new generation of marine surveillance aircraft. 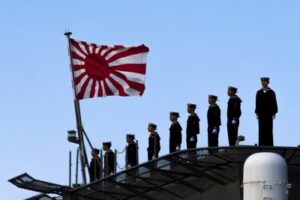 For Japan and Japanese companies, it has been tough to break any major ground despite several attempts in the past few years to target markets such as Australia, New Zealand and Great Britain. Shin Maywa’s deal with India’s Mahindra Group to sell more than a dozen US-2 amphibious aircraft for deployment to the Indian Navy and Coast Guard was Japan’s only success after years of negotiations. Although not a big-ticket deal, it is nevertheless a major breakthrough that may have some cascading effects — especially in Indo-Pacific markets.

In 2015, the Japanese government set up the Acquisition, Technology and Logistics Agency within the Ministry of Defence to promote the sale of arms overseas. To display its military wares, Japan has begun to participate in major international arms exhibitions and seek opportunities globally. Japan also organised its first post-war arms exhibition in 2015 in Yokohama. This three-day event was held in association with the Japanese government, a British company, the United States Seventh Fleet Command and the Australian Department of Defence. The event aimed to display Japan’s latest military wares and had a particular focus on the fields of maritime security, disaster management and rescue operations.

Japan is trying to project its foray into the world’s arms market as not a promotion of ‘war’ but for the preservation of ‘peace’ and humanitarian purposes. This explains Japan’s focus on wares that have surveillance, rescue and disaster management functions. But this has not prevented critics from arguing that Japan is joining the club of the ‘merchants of death’.

Japan’s rising interest in selling arms overseas is a part of the governments ‘Abenomics’ strategy, which essentially strives to boost Japan’s more than two-decade-long sluggish economy through a number of fiscal, monetary and structural changes. Arm exports and the associated manufacturing industry could form part of Abenomics’ ‘third arrow’ and benefit the Japanese economy.

While there may be a strong economic argument, the strategic thinking behind Japan’s new policy is not insignificant. For example, the 2013 National Security Strategy advocates joint development and production of defence equipment as part of its ‘proactive contribution to peace’ and even promotes the overseas transfer of arms and military technology.

The Development Cooperation Charter of 2015 — the third since Japan issued the first such document in 1992 — supports the aims and objectives of the National Security Strategy. It advocates a proactive contribution to peace and opens up the prospect of transferring military hardware using the aid budget.

Although not purely designed for combat purposes, Tokyo donated patrol ships to some Southeast Asian nations as part of its official development assistance. Tokyo supplied those vessels in the name of securing the recipient countries’ borders and to maintain peace. Tokyo also supplied its TC-90 aircraft to the Philippines, which were deployed recently by Manila to Scarborough Shoal in the South China Sea. It won’t be surprising if Tokyo puts more and more of its aid budget towards military equipment for ‘peaceful’ purposes and for its narrative of a ‘Free and Open Indo-Pacific Strategy’. There are also prospects to subsidise arm sales using the ODA budget.

Japan’s new policies of supplying vessels using its aid budget, selling arms through commercial deals and pursuing international joint development of military equipment is not intended to decentre its strategic orientation from the United States. It supports Japan’s alliance with the United States by largely focussing on doing arm deals with US allies and partners including Australia, NATO members, Southeast Asian nations and India.

Tokyo’s approach to the French–German P-1 project connects Japan to NATO nations. P-1 is a Japan-developed and Japan-made state-of-the-art submarine hunter aircraft that was created exclusively for the Japan Maritime Self-Defense Force. Despite its advanced features, Japan may find it tough to compete against established suppliers from the United States and Europe.

Japan is still a nascent player in the global arms market. Although arms producers in Japan (such as Mitsubishi, Toshiba and Kawasaki) are well known for their precision and state-of-the-art technology, they have thus far sold their wares exclusively to the Japan Self-Defense Forces. These are not combat tested and are hence an unknown quantity.

Japanese government departments and defence manufacturers have a long way to go before they can establish themselves in the global arms market. The appetite to sell arms internationally is not strong among the general Japanese public or within Japan’s defence establishment, nor have Japanese companies developed the global networks that they have created for their non-military products. So far Japan’s government and manufacturers have had little success, and chances of Japan emerging as a major global supplier of arms are miniscule.