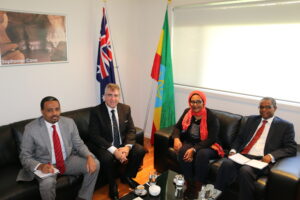 Preliminary discussions were held between Dr. Bruni & Ambassador Gebrehiwet on how SIA can best assist Ethiopia in attracting a higher profile in Australia. After the meeting Dr Bruni said:

“With a rapidly developing and young population of around 100 million people, we in Australia should seize the opportunity the country presents to further trade ties, tourism, and a general exchange of knowledge with this increasingly important country. It is the diplomatic centre of Africa, it is the gateway for most foreign investment into East Africa that lies to Australia’s extreme western littoral.

We already have mining interests in-country, but we can do much more.

Now is the best time to engage Ethiopia. Its government has changed for the better, there is peace along the Ethiopian-Eritrea border which can only further the country’s attractiveness to business.

And from a competitive perspective, with the heavy PRC commercial presence in Ethiopia, why let the Chinese steal the march on us investment-wise?

And from a humanitarian perspective, investing in Ethiopia now will help the country consolidate its positive socio-political trajectory.

Ethiopia has transformed itself from the chaos of the 1980s into a rapidly developing and modernising economy. Ethiopians are a proud, hardworking people and the country is one filled with hidden treasures, natural as well as cultural.

Best of all it really is a place where you can make money and feel good about doing so”.