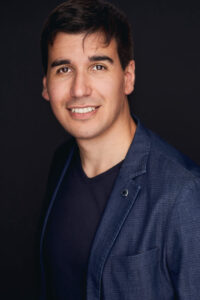 The interior of a spaceship. At the centre, a massive orb containing the vast, pitch black emptiness of space, dotted with colourful galactic windmills and starry pulsations. Two supernatural beings, hunched over the Universe, watch planetary systems zoom past. They suddenly lock their aeons-old gazes on a world tinged with blue and green hues: ours. Fear not, this is not the opening scene of an upcoming Marvel movie, but this author’s creative adaptation of the incipit of Isaac Asimov’s ‘Silly Asses’ (1958).[1] In this sci-fi short story, Asimov criticizes humanity’s complete disregard for its sole planetary lifeline, Earth, with his (trademark) biting humour and masterful storytelling. At the time of publication, the heyday of nuclear weapons testing had just begun[2] and Asimov, like many others, was utterly appalled. At the end of the novella, Asimov voices his accusation via a final, irrevocable (extra-)terrestrial judgement: for the nonsensical use of nuclear devices on its own planet, humanity has failed to reach maturity and is thus a race of ‘silly asses’.

Fast forward to over half a century later and that denouncement is still sadly resonant. While we have seemingly abandoned nuclear testing within our planetary boundaries,[3] we have continued undeterred to recklessly engage in the unbridled pillaging and the unchecked pollution of the Earth’s natural resources and ecosystem. How would our planet look like in the future if this rat race for growth and profit were to continue unabated? Once again, the answer is in the stars. Whereas the recent achievements of NASA’s Mars Perseverance rover should be cause for celebration,[4] the red, dry husk of Mars could very well be the Earth’s in times to come. While the world grapples with the COVID-19 pandemic, the climate crisis is fast unfolding. If the virus affects our ability to collectively stand upright in good health, the climate crisis ultimately pulls the rug right out from under our feet, resulting in a fall with no remedy and no return.

In the recent United Nations Development Program’s (UNDP) ‘Peoples’ Climate Vote’ survey, encompassing 50 countries and over half of the world population, 64% of respondents viewed climate change as a global emergency.[5] It is indeed a clear majority. However, this figure also highlights that for a considerable number of people climate change is still not an immediate threat. To some, the natural limit of our lifespan and the seemingly distant and otherworldly manifestation of simultaneous world-wide extreme climate events make the climate crisis a ‘much ado about nothing’ issue. It is far down the road and beyond their allotted time on Earth. To others, more immediate concerns, such as having food on the table and an income generating occupation, demand priority; and justly so, if only the climate emergency did not place both in jeopardy. Some appear to lack any empathic link beholding them to the livelihoods of future generations. Others are swayed by the narrative propelled by those with vested interests in the status quo, depicting climate activists as doomsayers and the climate crisis as nothing more than the periodical, natural heating of the Earth’s atmosphere.

I am not going to present a case on why we should care about and act on the climate crisis here. World-renowned scientists, experts, and activists have already done and are continuing to do so in a variety of formats and in much better ways than I ever could.[6] I only wish to point out the following. In its 2007 report, the Intergovernmental Panel on Climate Change (IPCC) declared: “Scientific evidence for warming of the climate system is unequivocal.”.[7] According to an academic paper published in 2019, the scientific consensus on anthropogenic global warming is now unanimous.[8]If this were not enough, the heartbreaking silences due to habitat and wildlife species loss across the world are also incontrovertible. According to the ‘2020 Living Planet Report’ by the World Wide Fund for Nature (WWF), deforestation, unsustainable agriculture, illegal wildlife trade, and other factors have caused the overall wildlife population size to decrease by 68% since 1970. Australia currently holds the bitter top spot in the ranking of countries as to wildlife extinction rates.[9] And this is only the tip of the melting iceberg. By harming the planet, we harm ourselves. COVID-19 is just one of the many zoonotic diseases humanity will have to face if more forests are felled, water sources are drained, and landforms are levelled. In the meantime, the melting of polar ice caps caused by human activity causes rising sea levels, destabilizing weather patterns and threatening coastal cities and populations. In the northern reaches of the world, man-made factors are thawing vast expanses of permafrost releasing several hundred million tonnes of greenhouse gases into the atmosphere. These could very well snuff out any hope of reversing global warming.[10]

Are we then too late? Is it all doom and gloom? Luckily for us, it is not. Yes, we are indeed teetering on the brink of no return, but the vigour of the youth climate movement, the national and international commitments to address climate change demonstrated by the recently sworn-in US President Joe Biden, the popularization of the circular economy concept,[11] the individual and collective actions towards greener lifestyles– just to mention a few– have somewhat slowed down the fraying of the lifeline connecting us to Planet Earth. Is it enough? No, much more is needed. We need comprehensive systemic change. The ideas and policies are there. We need to support their adoption and ensure that no one is left behind. A UN report released in February this year defined 2021 as a ‘make or break’ year for humanity’s action on the climate crisis.[12] Next November, countries will meet in Glasgow at the COP26– the meeting of the 197 nations signatories of the United Nations Framework Convention on Climate Change – to, hopefully, resolutely tackle the emergency. In the meantime, we need to make sure that when our heads of government meet, they see a clear and prevailing support for a wide range of climate-based policies. After three quarters of a century, it would be great to prove Asimov’s (extra-)terrestrial judgment wrong. No, we are ‘silly asses’ no more.

[2] At that point, more than 200 recorded underground and atmospheric nuclear tests had been conducted since the first one on US soil in 1945.

[3] The only gross exception at the moment is North Korea; the country ran a total of 6 nuclear tests between 2006 and 2017.

[6] Read distinguished climatologist Michael E. Mann’s interview with The Guardian for an insightful look at current efforts to advance a climate emergency centred global agenda and to combat disinformation campaigns by the so-called ‘coalition of the unwilling’ (28 February, 2021).

[7]  The IPCC is the United Nations body for assessing science related to climate change. To view and access the 2007 report, click here.

[11] To learn more about the circular economy, click here.