At the time of writing Turkish forces have started their ground incursion into northern Syria in order to disrupt and destroy Kurdish paramilitary forces in this hotly contested area. This after President Trump cleared the way by withdrawing US forces that were helping to protect Syrian Kurdish positions.

The Turkish government has long grappled with its own internal Kurdish problems, hosting some 15 million Kurdish

people within Turkey, with their own well-armed and highly motivated fighting force, the Kurdistan Worker’s Party (PKK). This internal Turkish struggle has from time to time seen the Turkish military take the fight into neighbouring countries such as Iraq and Syria where other Kurdish communities reside, sympathetic to and supportive of the cause of Kurdish independence and who give aid, material support, rest and respite to PKK fighters battling Turkish forces.

Many in Ankara believe that the only way to scotch Kurdish aspirations is to root out and destroy every vestige of PKK activity within Turkey and elsewhere. Only then can a political settlement be put in place, one which favours the Turks and continues to disadvantage Turkey’s significant Kurdish population in southeast Anatolia.

What makes this issue so perplexing is that across the border in northern Iraq, since before the fall of the Hussein regime, the West supported the formation of an autonomous Kurdish Regional Government (KRG) which in effect is independent of Baghdad, and yet still tied to the Iraqi government in a forced confederal arrangement. No one in the international community wants to see the Kurdish people create their own homeland since doing so will significantly redraw the map of the Middle East and create new power imbalances that could lead to even more devastating wars in the region. Consequently, it is in everyone’s interest to maintain a sense of status quo where Kurdish communities, whether in Turkey, Syria, Iraq and Iran remain as outcasts – a people without a homeland, destined to be a persecuted minority wherever they happen to live.

What also makes this issue perplexing is that Kurdish militia, whether in Turkey or across the border in Syria, Iraq and to a lesser degree Iran have all proven to be superb fighters. They have consistently punched above their weight in terms of defending their ‘space’ from encroachments from local, heavily armed military forces sent in to wipe them out.

This fighting skill has made them extremely useful.

Iraqi Kurds were used in keeping the forces of Saddam Hussein at bay, and when the time came, to help destroy his toxic regime. They were used by Israeli intelligence to keep an eye on Iraqi religious extremist groups operating in Iraq’s north as well as on Iranian activities. And they were used by the assembled Western Coalition in 2014 to aid in the war against the ISIS Caliphate.

Across the border in Syria, the civil war which effectively ruined the country liberated the Kurdish areas from Syrian government control along the Syrian-Turkish border.

This meant that PKK fighters could use this territory to escape Turkish forces, regroup in northern Syria unmolested and re-enter Turkey.

The fact that Russia, Iran, Hezbollah the Syrian government and a small group of American service personnel were all engaged in Syria, many times at cross purposes, made for an extremely high-pressure, close quarter engagement that could have sparked a major international confrontation. Indeed in 2015 a Turkish Air Force F-16 combat plane shot down a Russian Su-24M fighter-bomber, sparking a major international incident between Moscow and Ankara that could have ended very badly had cooler heads not prevailed. As it was this incident cleared the way for a Russo-Turkish détente that has seen both Turkish President Erdogan and Russian President Putin take exceptional steps toward establishing better relations.

As for the Americans, they plied the Syrian Kurdish People’s Protection Units (YPG) with weapons and training in order to exploit their fighting skills against ISIS. The fact that YPG militias operated across borders made them very handy in gathering intelligence, slipping into ISIS defended territory, striking at ISIS targets and disappearing back from whence they came. But Syrian Kurds weren’t doing this because they loved America and the Western way of life, they volunteered their services as American proxies because ISIS posed a clear and present danger to their newfound freedoms and at the very least, they may have anticipated that while Damascus remained in chaos, Syrian Kurds would be rewarded for their efforts against ISIS with a similar confederal relationship that existed in Iraq between Baghdad and the KRG, of course with the backing of the West.

This was not to be.

Turkey has viewed the Syrian Kurdish problem as a nail requiring a hammer to fix its internal PKK problem.

Of course while Turkey’s current offensive may well displace Syrian Kurdish fighters to ‘south of the border’ and destroy much of their military capabilities, unless Turkey can achieve total and complete military dominance over this border area, which will have to include a protracted occupation of northern Syria, whatever they achieve now will only be temporary. Furthermore, across the shared Turkish-Syrian border sits the Iraqi KRG which could shelter YPG and PKK fighters. Can Turkey also take on the KRG? And what would the international repercussions of such a move be for Ankara generally and Erdogan in particular?

Another key issue is the containment of ISIS fighters, currently in the custody of Syrian Kurdish makeshift ‘prison camps.’ Many of these fighters are of foreign origin, radicals from Europe, Australia, Asia and North America. What of their fate? Will the Turkish government take these camps over? Will vengeful Syrian Kurds, now betrayed by the Americans, open the gates and simply walk away, letting these dangerous people back into the towns and cities they once controlled? Or will ISIS fighters escape to Europe through Turkey as President Trump wistfully mused?

Whatever happens, this situation can rapidly internationalise and escalate.

Presently there is a squadron of Turkish warships that have allegedly surrounded Cyprus. This will be focussing the minds of NATO officials in Brussels as well as policymakers in Athens. There have also been rumours suggesting the Russian forces in Syria, as well as Iranian forces, are on heightened alert, though it is far too soon to say whether they will be trying to check the Turkish advance – after all, doing so may well break the Russo-Turkish détente. 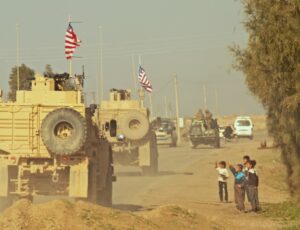 In the end, it is more than likely that Syria’s Kurds, bereft of American support may turn back to their enemy, the Assad regime. Bringing the Syrian Kurdish territories back under Assad’s control will ‘unify’ Syria and bring much of the civil war to an end. But Syria will be a spent force. Its cities are smashed, its military exhausted, its economy devastated. It is unlikely that Assad will be in the position to act as a champion for the Syrian Kurds since the Syrian military is in no position to take on Turkey. His ‘victory’, if it comes will be hollow.

As for the Americans, the Trump administration’s abandonment of the Syrian Kurds to the Turks was not nor should it be blamed on the US military. Indeed, the Pentagon reacted with surprise and outrage at this presidential request, but as the President of the United States is the Commander-in-Chief, little can be done to forestall the power of the office of the president – mad, bad and sad as it has become.