Critically, almost every Russian Army unit, together with the Vozdushno-Desantnye Voyska (VDV) Division (elite airborne force), have been deployed to Ukraine.

“Russian forces have almost certainly suffered thousands of casualties during their invasion of Ukraine. Russia is likely now looking to mobilise its reservists and conscript manpower, as well as private military companies and foreign mercenaries, to replace those considerable losses. It is unclear how these groups will integrate into the Russian ground forces in Ukraine and the impact it will have on combat effectiveness”.

The deployed Russian Army in Ukraine is some 190,000 strong, so where are the remaining 800,000 or so active and reserve personnel?

In June 1815, on the eve of the Battle of Waterloo, and shortly after the holding Battle of Les Quatres Bras, Marshal Emmanuel Grouchy was ordered by Napoleon to take a third of the French Army and prevent the Prussians from joining up with their British allies.  Even though he could hear the guns of Waterloo, and in spite of fierce protestations from General Gérard, Grouchy refused to march to join forces with Napoleon who at one point during the battle was heard to shout, “Où est Grouchy?” There is little doubt that had the lost army intervened between Wellington and Blucher the result of the Battle of Waterloo would have been very different. As the NATO Emergency Summit gets underway in Brussels and his military campaign in Ukraine falters Putin might well be asking: where is the Russian Army?

Estimates vary as to the size of the Russian Army but Global Firepower suggests there are 850,000 regular soldiers and some 250,000 reservists. However, these figures are a bit misleading because they suggest there is much that has not been committed.  The Russian Army is just under 200,000 active soldiers, along with 15,000 naval infantry.  Although it is far leaner than western armies, there being roughly one support soldier for every combat soldier, the actual fighting force is around 100,000 at most. Other force components, such as the 340,000 strong National Guard is not really intended for front-line combat service.  Therefore, it is reasonable to conclude that available Russian ground forces as close to being totally committed.

The culminating point of the force Putin sent into Ukraine a month ago has almost certainly been reached with its capacity for offensive operations en masse much reduced. Almost the entire force of 190,000 personnel that was ordered into Ukraine is now engaged in the campaign.  The Ukrainians claim to have killed 12,814 Russian soldiers as of March 22nd, with over 40,000 wounded, whilst NATO estimates that 8,000 to 15,000 have been killed.  Ukraine also claims 5,000 mercenaries have been killed. Russia has also lost 1,400 armored vehicles, 1,470 tanks, 96 aircraft and 118 helicopters. Whilst these figures must be treated with caution they give some indication as to Russian losses. Even though US intelligence estimates the force still retains some 90% of its fighting power, the force has clearly been badly mauled.  This failure partly explains the switch to the use of long range fires against civilian populations in places like Mariupol, as well as the recruitment of Chechens and Syrians to bolster Russian ranks.

What is left? Critically, almost every Russian Army unit, together with the Vozdushno-Desantnye Voyska (VDV) Division (elite airborne force), have been deployed to Ukraine. There is little information about the specific divisions and regiments that remain in Russia, and what force numbers still remain available for forward deployment. Any such analysis is complicated by the Russian practice of deploying forward Battalion Tactical Groups or BTGs. When Ukrainian sources report that a Russian division is active on a given axis, it is almost always simply one or two BTGs from that division, and not the entire formation.

This is important. A Battalion Tactical Group [batalonnaya takticheskaya gruppa] is a highly deployable, albeit temporary, formation designed to undertake specific operational tasks. A BTG tends to be a reinforced battalion reinforced by the required support needed to complete its tasks. As such BTGs are drawn from an array of larger formations and tend to be the best trained and equipped, with each having a complement of between 700 to 800 personnel, with some as large as 900 strong. As of August 2021, the Russian Army had 168 BTGs of which 83 are believed to be engaged on operations in Ukraine. On March 21st, the US Department of Defense estimated that the Russians have already committed some 75% of their BTGs together with 60% of their air power.

The Russian General Staff is also drawing in forces from across Russia, including the Far East and Georgia. This suggests that almost all of Russia’s available active-duty combat power is now committed to the fight in Ukraine.  Moreover, only a portion of any army is real combat power. The rest is made up of combat support and combat support services.  One reason for Russia’s apparent chronic logistical problems could be that rear echelon forces are being hastily inserted into the fight in a desperate attempt to maintain momentum.

One answer to the conundrum is force rotation. As the campaign switches from fast offensive maneuver to force attrition the regular Russian Army will need to be rotated over time and through a very large operational area. Normally, that would require a third of the force to be engaged, a third resting, and a third working up, roughly 600,000 personnel. However, with the overwhelming bulk of the fighting army in Ukraine, there are simply not enough other full-strength units to rotate in and replace depleted or tired units.  In such circumstances, the Russians must pause, reorganize, refit and retrain with reservists and conscripts but ‘growing’ the army by any appreciable amount will take time.

Another problem seems to be the stalled professionalization and modernization of the Russian Army.  An analysis of recent operations, such as those in Syria, together with recent exercises such as Zapad 21 and Vostok 18, indicate the same repeated use of the same high-quality but relatively small spearhead units.  Thus, whilst the Russian Army might seem impressive on paper, its performance in the field is far less impressive.   This is exactly the same problem that was faced by the British Army during World War Two which relied heavily on a few elite formations to spearhead offensives, such as the British Eighth Army.  As those formations tired or were worn down by losses the entire offensive slowed with them.

The extent of the conundrum General Gerasimov and the Russian General Staff now faces is all too apparent when the extent of the force already deployed to Ukraine is analyzed.  All 12 army headquarters have been committed (1 Guards Tank Army, 2nd Combined Arms Army (2CAA), 5CAA, 6CAA, 8CAA, 20CAA, 29CAA, 35CAA,36CAA, 41CAA, 49CAA, 58CAA).  Moreover, virtually all the subordinate maneuver divisions and brigades are also in Ukraine, except that is for the curious case of the main force of the 5th Combined Arms Army (without its headquarters) in the Eastern Military District.  There is no evidence either that its 4 maneuver brigades (70th Motor Rifles, 60MR, 59MR, 57MR) have been engaged.

All 4 divisions and 3 brigades of the Russian airborne/air assault forces are also in Ukraine, together with all 5 naval infantry brigades and the 14th and 22nd Army Corps, together with 5 of the 7 Spetsnaz (Special Operating Forces or SOF) brigades are in Ukraine. The 14th Spetsnaz is based in Russia’s Far East, whilst the 16th Spetsnaz, which is based some 220 miles/320 kms south-east of Moscow, have either not been committed, or at least not yet identified in Ukraine. One reason could be the need to protect Putin and the seat of government in Moscow in the event of any coup attempt.  The 11th Army Corps in Kaliningrad (18th Motor Rifles Division, 7th Motor Rifle Regiment) remains in garrison, as does the 68th Army Corps on Sakhalin Island (18th Machine Gun Division, 39th Motor Rifle Brigade).

Therefore, Russia does not have many more regular formations Moscow can insert into to the Order of Battle.  There are small formations in Transnistria, Armenia, Abkhazia and South Ossetia, but they are not big enough to make a great deal of difference should they be switched to Ukraine.

Having reached their culminating point Russian ground forces have two options. First, go over to the defence and try and retain the ground they hold, whilst at the same time reorganizing, refitting and absorbing replacements and new conscripts. Second, use the time to build up for another human-grinding Russian offensive.

It is the latter option that the UK Defence Intelligence Agency thinks likely. April 1st marks the start of the new recruiting season for conscripts and it is clear from the narrative Moscow is peddling that the Russian people are being prepared for a longer war than anticipated.  However, given Russia’s grievous losses and the poor training and equipment of the conscripts, any reconstituted units will be far less capable than those that began the campaign.  That is why the strategy is likely to rely increasingly on indiscriminate air attacks and long-range artillery and missile strikes to hammer cities and wear the will of the Ukrainian people to resist. It is also why the Ukrainians are seeking anti-air and counter-fires systems from NATO and other partners. Tragically, this next phase could become even uglier if recent tragedies in Grozny and Aleppo are any indication.  Apart from pondering the mobilization of reserves, and an even greater use of conscripts, Moscow is also considering the possible use of weapons of mass destruction, such as chemical, biological, and even tactical nuclear systems.

In other words, President Putin may well be facing his Waterloo in Ukraine, but at what appalling cost to Russians and Ukrainians alike? There is no Grouchy, no lost army that can join the fight quickly only far more ground grinding death to mark Putin’s folly!  To give some idea of the scale of the force committed by Russia to the war in Ukraine this article concludes by simply laying out the estimated Order of Battle of Russian forces in Ukraine. 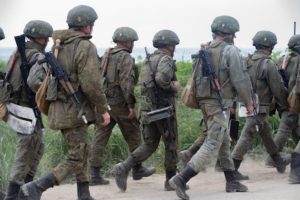 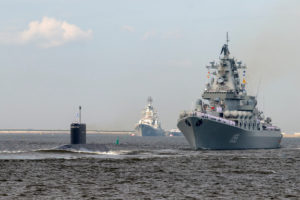 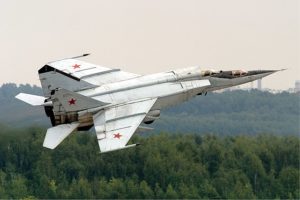 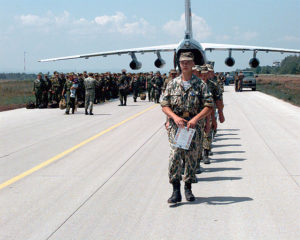 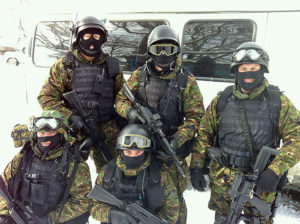