It is with a heavy heart that I write this commemoration note for our Chief Editor and Content Writer, and my mother, Mrs. Renate Yolanda Bruni (nee) Stadlmaier.

Over the past two years, she had been fighting neuroendocrine cancer, and in spite of her exceptional strength, her fight was lost on 2 July 2018. Up until a week prior to her passing, Renate was still actively assisting SIA in her assigned role – such was her commitment to SIA and to her beloved son. 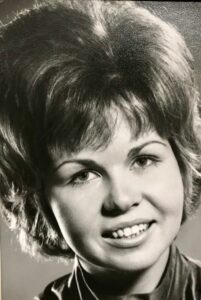 Renate in her younger years.

Born in Graz, Austria, in 1944, as a gifted child, Renate was educated at the humanistische Gymnasium where at a very young age she learnt Latin, Classical Studies, Logic and High Arithmetic among her subjects.

Upon coming to Australia in the 1950s, at age 11, circumstances, and the then Australian education system, prevented her from continuing with her advanced education. But she never lost her passion for learning, often going through her old classical studies texts until she met my father, Francesco Walter Bruni. Together, they pledged their lives to giving their only son the life they could never have. 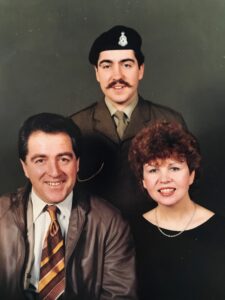 Renate’s father, a former soldier in the Wehrmacht & a qualified civil engineer, and John’s father, who’s dream was to join the Italian Marines before his own father died leaving him as his family’s sole bread-winner, showed our family’s abiding interest in the military. In my father’s case, he had to find work in the civilian sector to support his three brothers and widowed mother – a journey that eventually led him to Australia and Renate.

Our home was an unusual, beautiful and loving. It was a home filled with songs, laughter, and debates and conversation on history and politics. My parents were father, mother, brother, sister, friend and Svengali to me. They were instrumental in providing the foundation for all that I have achieved. And to speak of my mother without my father would not do their union justice, such was the love they shared for each other. When cancer claimed my father in 2007, I did not think that my mother would survive, so deep was her hurt at his loss. But stoicism is the philosophy that drove all of us and, after a while, we picked ourselves up and lived the best lives we could. 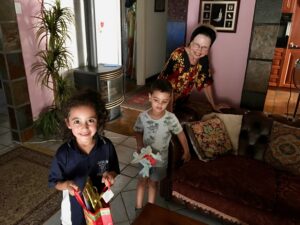 Renate with her grandchildren, Gaby and Caleb

Renate is survived by her devoted son, John, and her much loved grandchildren, Gabriela and Caleb, the apples of their grandmother’s eye.

Thus, SAGE International Australia commemorates the life and times of Renate Bruni. As for myself, this quote discovered by chance, captures my thoughts – “days will pass and turn into years, but I will forever remember you with silent tears”.