Professor in Asian Studies at the University of Adelaide,

Managing China relations has been one of the most challenging tasks for Indian foreign policy makers ever since the two fought a short but bloody war in 1962. China’s frequent and rising incursions into the Indian territories[1], its financial and military support to Pakistan – India’s nemesis, long-running border disputes, and India’s granting of asylum to the Dalai Lama have been some of the most sensitive geo-strategic and politically-charged issues that have troubled their relationships for decades.

A recent example of a serious military standoff occurred in mid-2017 in the disputed area of Doklam at the tri-junction between India, Bhutan and China. Although they disengaged after a 73-day face off, they have by no means come to any agreement on the border quarrel. The regions of Aksai Chin and Arunachal Pradesh – the former administered by China and the latter by India – have been hotly contested by the two. Together they constitute one of the world’s largest disputed territories. 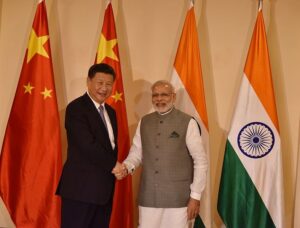 While these sore points have continued to breed distrust and fester in the background, in recent months analysts have suggested that a reset or even a game change has occurred in the relationship[2]. The leaders of the two nations have met three times within a span of four months, beginning with an informal bilateral summit between Prime Minister Narendra Modi and President Xi Jinping in the Chinese city of Wuhan in April, followed by their meetings in June and July on the side lines of the Shanghai Cooperation Organisation (SCO) summit in China’s Qingdao and the BRICS summit in Johannesburg. Although no substantial progress in the vexed relationship has been made, these were important icebreakers between leaders of the world’s two most populous nations and centres of economic growth.

With this development in the India-China relationship, a moot question is what impact it might have on Japan and its relationship with India, a relationship largely but not solely, built in the last decade in the shadow of China’s rise. Both have territorial issues with China, are hugely concerned about the Asian giant’s military assertiveness and unilateral actions, as well as its relentless push using its money muscle to displace Japan’s and India’s spheres of influence in their traditional playing fields in South and Southeast Asia and elsewhere. Neither Japan nor India has the financial capacity to compete with China and outplay Beijing in this game.

Concerns over China has led Japan to woo India by injecting massive financial resources into the latter’s many infrastructure projects, including funding for its high-speed train project through aid money. India of course, also wants to cultivate deep ties with Japan on many fronts. The two nations’ passion for the new geographical construct of the Indo-Pacific and shared vision on many other bilateral and minilateral matters have taken the trajectory of their bilateral relationship to a new high in recent years.

The two nations’ prime ministers have met annually for more than a decade and have sought not only to promote bilateral ties but also cooperate on global matters such as terrorism, piracy, and infrastructure development, making them ‘strategic and global partners’. Partnership in the development of Africa is one such joint initiative.  Japan’s support for India to join the Nuclear Suppliers Group (NSG) and their joint efforts to reform the United Nations make them trustworthy partners and friends. They even signed a security declaration in 2008 covering wide-ranging areas on security matters – an agreement unthinkable just a decade previously. Prime Ministers Modi and Abe have developed a special chemistry, not seen between any other two leaders currently.

The deepening India-Japan relationship is not likely to be affected by the new bromance between India and China. This is because the warming of ties between the latter two has been largely a tactical response to the emerging domestic circumstances in China[3], as well as new global uncertainties accelerated by the Trump presidency, while the roots of their strategic distrust have remained unchanged. Tactically, India and China may cooperate on certain issues in a transactional manner, but strategically, they remain truly competitive and even conflictual, with an underlay of deep distrust of each other. New Delhi continues to refuse supporting China’s multi-billion-dollar Belt and Road Initiative (BRI) because its flagship project – the China-Pakistan Economic Corridor (CPEC) – passes through Pakistan-occupied Kashmir, which India sees as a violation of its sovereignty and territorial integrity. Other unresolved irritants include Beijing’s refusal to endorse India’s bid for a permanent seat on the United Nations Security Council and membership in the NSG.

On the other hand, Japan, which was India’s harshest critic in the wake of the 1998 Pokhran-II nuclear tests, has today become one of New Delhi’s most important partners, with strategic networks to mutually support each other’s interests, both regionally and globally. China often views Tokyo’s cozying up to New Delhi with a critical eye and rebukes their initiatives and approaches as a ganging up against China. Beijing expressed its displeasure when the Quadrilateral Security Dialogue or ‘Quad’ was formed a decade ago and when it re-emerged  last year[4]. It was also critical of their decision to participate in multilateral naval exercises[5] even as China was itself expanding its military designs in the South China Sea and carving out spheres of influence elsewhere.

India-Japan relations today stand on solid ground with the institutionalisation of bilateral processes through an annual summit meeting between the prime ministers of the two nations, a 2+2 defence/foreign affairs dialogue, military to military talks and coast guard to coast guard cooperation, in the background of a long history of goodwill and little animosity towards each other. Some of the Cold War irritants and other concerns about India have long disappeared in Japan’s foreign policy outlook.

So solid is their foundation now that Tokyo is least concerned about the recent positive developments in India’s relationship with China. Furthermore, Japan-China ties are also on the mend, although unlike their Indian and Chinese counterparts who have met and hosted each other several times for official visits, the Japanese and Chinese top leadership have not conducted many bilateral state visits. Recently, the Chinese premier visited Tokyo and invited Prime Minister Abe to visit Beijing later in the year, as 2018 marks the 40th anniversary of the signing of the China-Japan Treaty of Peace and Friendship. But the fact that the President of China and Prime Minister of Japan have not held regular bilateral visits since they came to power over five years ago signifies a deep distrust of each other.

Both Tokyo and New Delhi have responded positively to China’s recent charm diplomacy, but they will be watching with a close eye on Beijing’s strategic and military moves in their territories and in their regions and beyond while strengthening their own bilateral ties on regional and global matters.